The Man who learnt to Fly but Could not Land

Here is a novel that speaks to millions about the instability of our country’s current fragile condition. The death of democracy. The sweeping of power from the smaller public to transfer of it to the ones who control economy and government in their pockets. The Man Who Learnt to Fly but Could not Land is at once a whisper to the artistic society and a scream to the political pivots.

A poet and political activist, Kottoor was active in political and literary circles in Malabar but never moved centre stage to etch his name in history. He symbolises many such activists who are the lifeline of any movement. They remain anonymous or, at best, as footnotes in the pages of history. We don’t know their names or their achievements or about their families. But each person must have had his/her own story. KTN Kottoor, a fictional character, was one such person.

Through Kottoor, we step into the main political movements that rocked Malabar and meet the leaders who were at the forefront of those struggles.

The Man Who Learnt to Fly but Could not Land is thinly veiled fiction. It barely hides that the author borrows everything in its pages from real history and from the events of the Freedom Struggle. This is a book about India’s cultural history, and in that sense, it is a good one. For those who are familiar with cultural and political scene in the last century, it’s difficult not to recognize nearly every character as a real person or escape the novel’s use of inter-textuality. It doesn’t try and hide cheeky references either. This intermixing of fact with fiction is something that struck me right at the first sight. As the author goes on shifting voices, from active to passive, to passive to active, from second to third person throughout the book, you continuously question yourself what is real and what is not. It is almost a Ramachandra Guha biography stuck in an intermixing fiction like that of Thayil. 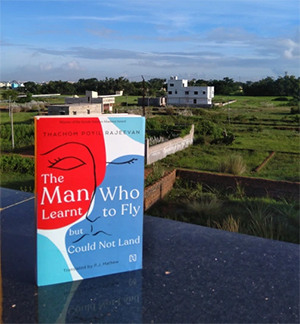 KTN Kottoor struck me at many different levels. His efficiency at judging political situations at a young age is something we can hope each one in the youth to have to save this country from doom. His poetic sense and his incredible clapback at stupid reviewers was such a spectacular scene to read. He laughs and says an incredible line which even today after a whole century is applicable at many levels, “….what they have read is not the poem. They have been reading the time and context of the poem. I am not a party to that.”

Though this book has a whole plethora of characters, a plate full of people who are different from each other in many many ways, yet this unusual satiable and acceptable protagonist is the apple of my eyes. I have not come across at such a dominating and strong protagonist presence in a novel in a very long time. Rajeevan’s style of storytelling and commentary has left me moved. There is not even a single moment in the book where you are not remembered of the protagonist. This is something that often only biographies have but to achieve this in a novel is really commendable.

One of the most striking scenes of the book comes right at the start when Kunjappa Nair, the father of Kottoor dies. The scene and it’s striking narration catches the breath of a reader. There is no gloom in the scene but rather a sensation of realisation in it. The way “independence” required a “sacrifice” is such a strong catchphrase. Rajeevan’s striking power of telling the scene with robust prose and ensuring that the reader gets not gloom but rather the sense of freedom and liberation after reading the part. The scene that made Kottoor who he is even the one that makes the reader cling to the book.

Why to name the book with such a long title? The title strikes you as a lightning bolt after you are done with the book. Kottoor learns to fly, to fly till the sun and enjoy the fluttering winds of the higher skies, above the clouds. He gets up from stratch, from his father’s death’s misery, grows wings and flies at the highest points. But as the country is caught in chaos in its rebirth, the life of this idealist is caught in the maelstrom. Not knowing how to land properly, he goes missing into thin air like a kite lost after the string is cut. 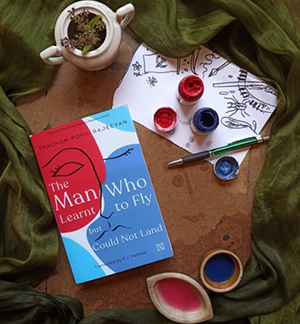 The additional writeups are masterpieces in themselves. One is hit by a sense of conflict when reading it, is it the author speaking through the protagonist or is it the protagonist acting like th author? As one ponders over this fact and tries to unknot to the tight and complex knot, he is sucked into the short prose’s unimaginable beauty in language and it’s attachment to the realism and it’s sense of current timing. The poems etched to perfection, liked diamonds formed under pressure, present fractured and hidden within miles of paragraphs.

An essential quality of works like these is a kind of boredom with the sheer exhaustiveness of details. This results in a constant turning of the pages to the endnotes. As a reading experience, this book is exasperating as well as exhilarating. T. P. Rajeevan handles the jargon and maxims with quite an expertise, satisfying the need of the themes. His style, depending upon the demands of the mood in the stories, could be racy or reserved, flowing or laconic, narrative or symbolic. While weaving the language into the fabric of his style, he maintains a logical balance to form a regular pattern. A novel with a difference, it tells us very human stories that make us smile, laugh out loud and sometimes get jolted. Hard. At other times it evokes poetry that makes the heart sing. The book is part fiction, part biography and part cultural criticism and it’s through its irreverential blurring of these lines that the book delights. This is among the best historical fiction I have ever read. Complex and fascinating. A treat for globetrotters who like to get under the skin of complex places.

Disclaimer: Thanks to Hachette India for sending me a copy of this book in lieu of an honest review.

Originally published on A Hindu’s View