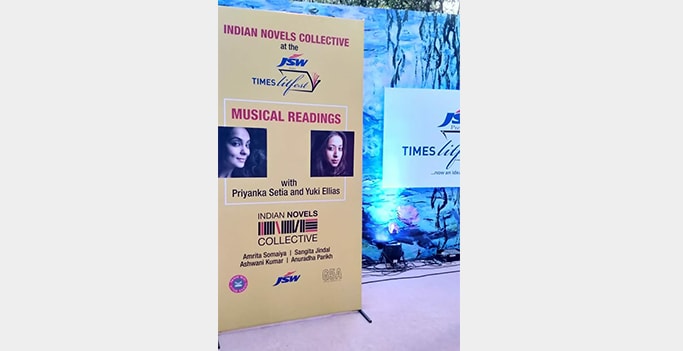 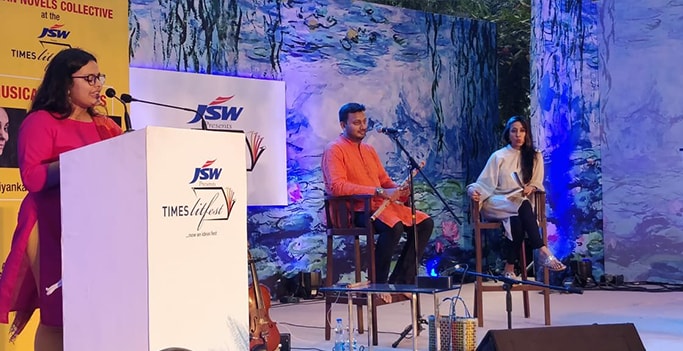 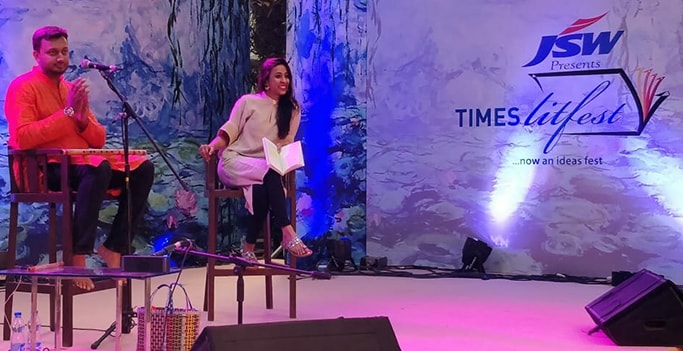 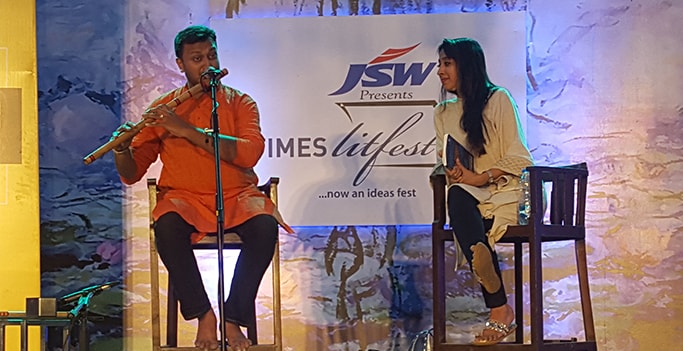 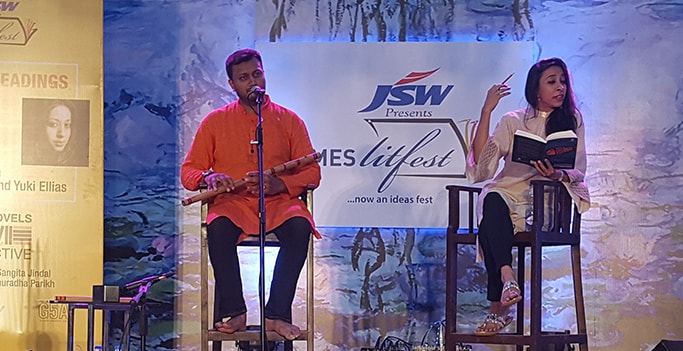 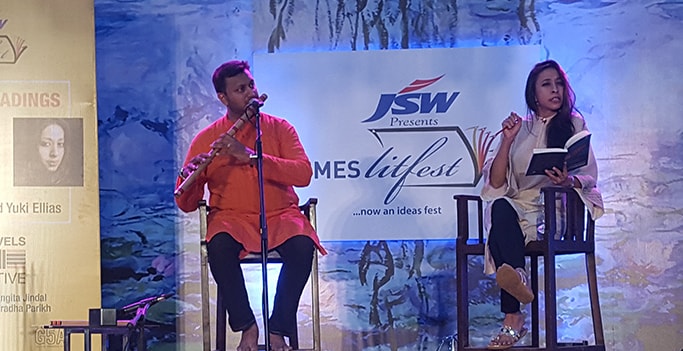 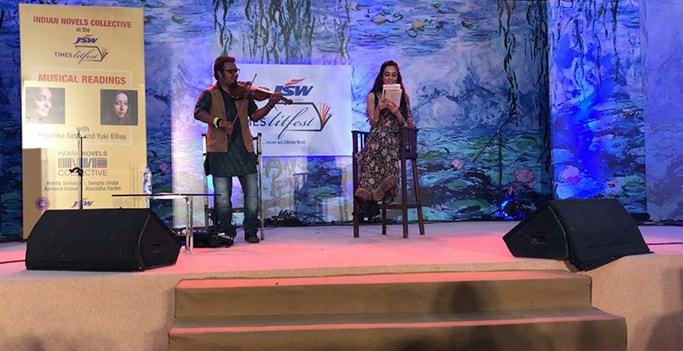 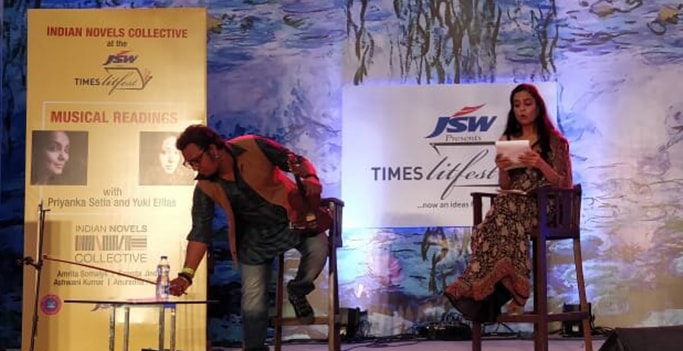 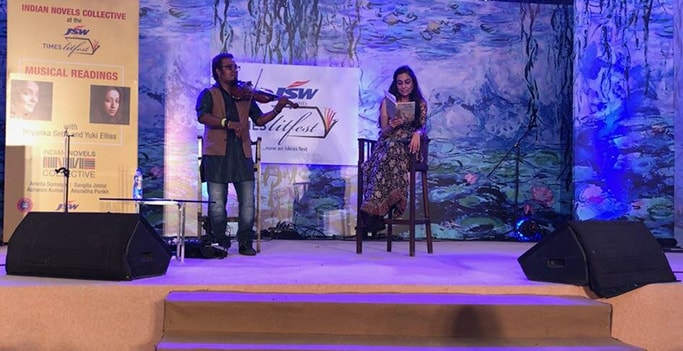 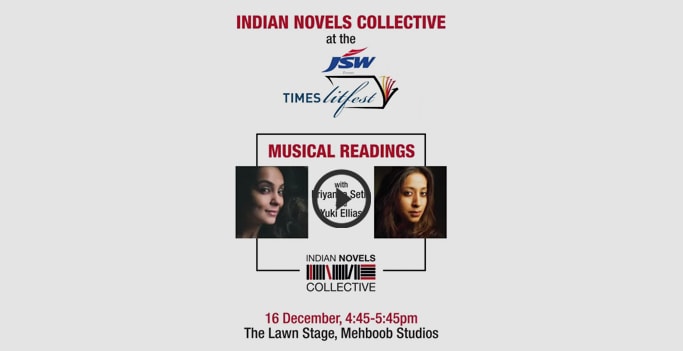 Indian Novels Collective’s houseful event, Musical Readings at the Times Lit Fest proved that there will always be takers for a good story regardless of the era it is set in and most importantly, the language it was originally written in.

One usually does not associate the Times Literary Fest with readings of Indian novels, but not only was this Indian Novels Collective’s second time at the Times Literary Fest but it was also a full house with the audience not wanting the readings to end! The event in question being Musical Readings with Priyanka Setia and Yuki Ellias. Viewers had the pleasure of hearing Yuki Ellias read excerpts from Manik Bandyopadhyay’s novel, Padma Nadir Majhi and Priyanka Setia read portions from Usha Priyamvada’s novel, Pachpan Khambhe Laal Deewarein.

Meanwhile actor and performer, Priyanka Setia read pages from Pachpan Khambhe Laal Deewarein accompanied by violinist, Sanchit Chaudhary. Written by Usha Priyamvada, the book captures the anguish of Sushma, a hostel warden who’s the sole breadwinner of her family and how she feels obliged to give up pursuing the love of her life as she considers it her duty to look after her three younger siblings.

If only they knew what they were missing out on. Despite being set in pre-independent India, Padma Nadir Majhi perfectly captures how fisherman and for that matter most blue collar workers and labourers from the unorganized sectors are treated. Rules pertaining to labour laws are not even half as stringent as they should be with workers, farmers and fishermen being grossly underpaid, overworked and made to work in the most inhuman circumstances. Yuki Ellias draws parallels with the novel which also touches upon how a petty and corrupt businessman, Hossain Miya is migrating fishermen to another island to set up a colony of sorts when she says, “All of us are trapped in a  certain sense of being kidnapped, taken to an island to work like dogs. Of course we get funded for it but exploitation has not changed, it’s maybe gotten worse.”

While Padma Nadir Majhi captures the plight of how fishermen are exploited, Pachpan Khambe Laal Deewarein is a story of a hostel warden who is also trapped by her circumstances. Despite finding love, she chooses to resist it and instead fulfill her duty towards her family, who without saying anything expect her to support them since she is working. When she finally does find herself getting attracted to a younger man, Neel, she finds herself subjected to a lot of scrutiny from both her colleagues, students and her family who comment about petty things like how much she goes out and what time she comes, while they assassinate her character, simply because she for once decides to befriend a younger man and thinks about herself.