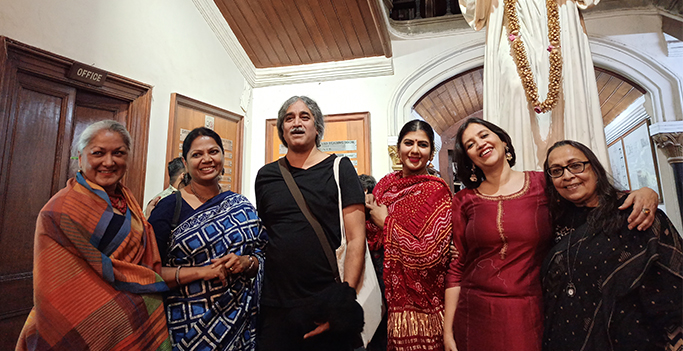 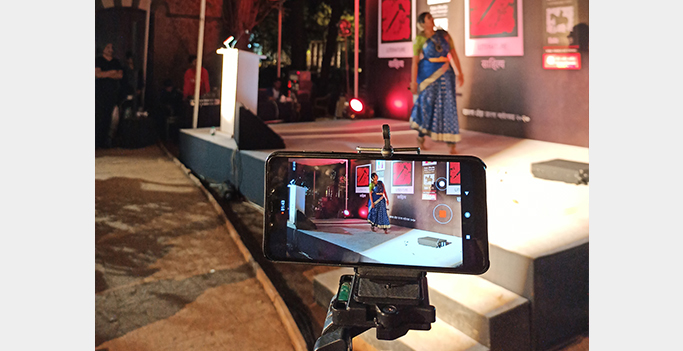 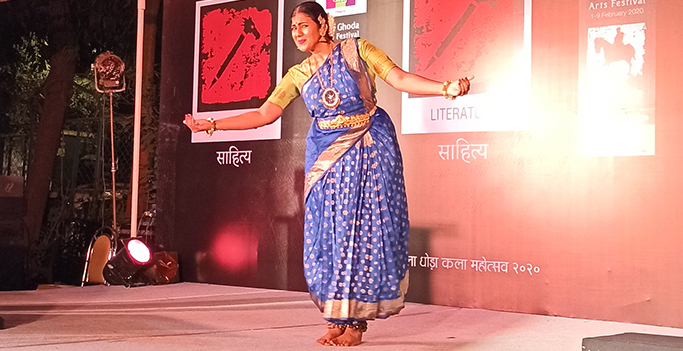 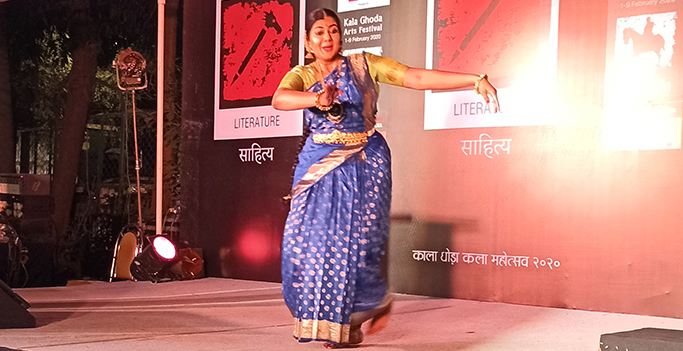 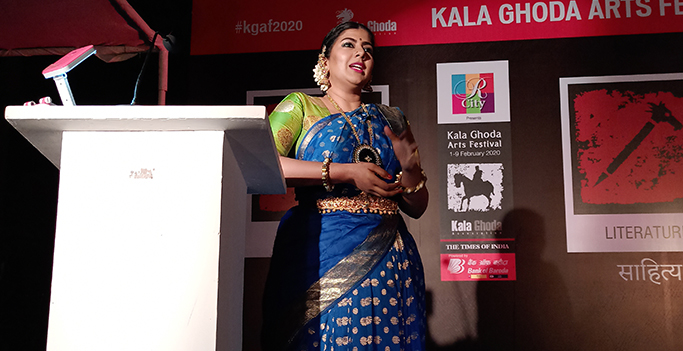 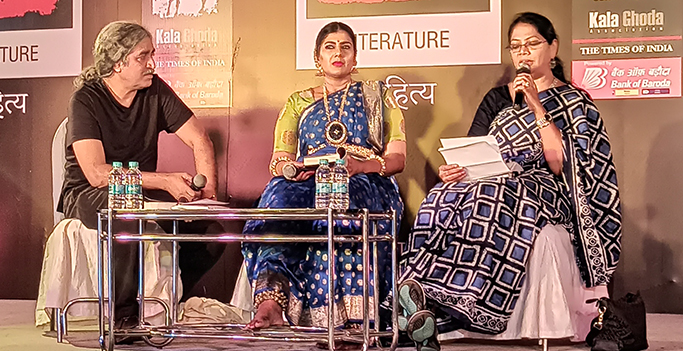 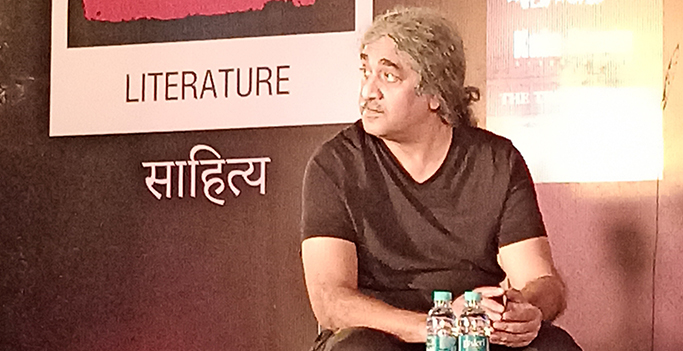 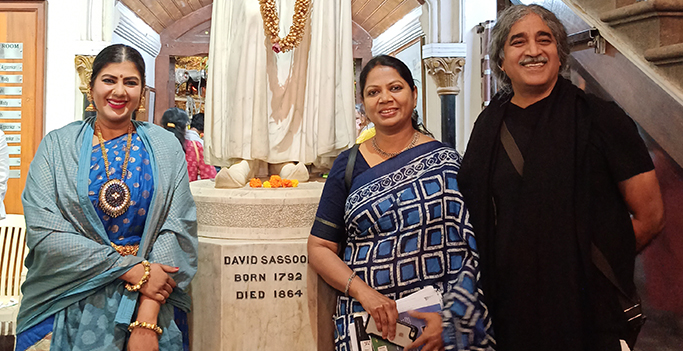 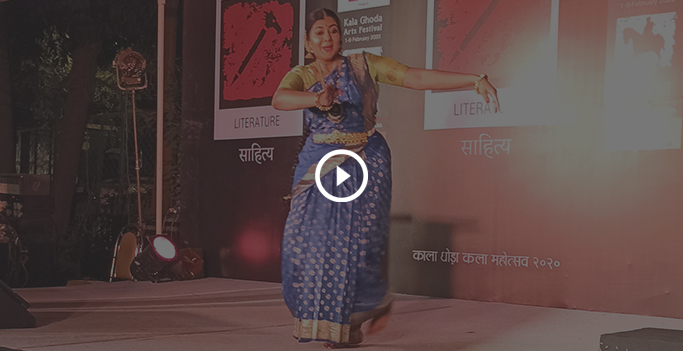 On Saturday, 8 February 2020, at the David Sassoon Library Grounds, Indian Novels Collective presented ‘Conversations and Performance on a Tamil Classic’ by intermingling literature with music, dance, readings, and performance.

The event started at 8.30 p.m. with a brief introduction to the guests for the evening – Rajathi Salma and Dr Swarnamalya Ganesh. Ashwani Kumar, the co-founder of Indian Novels Collective spoke of how it was a first for Indian Novels Collective to be venturing into Tamil literature. He dwelled on the aspects of what made M.V. Venkatram’s novel, Nithya Kanni, a revolutionary piece of classical Tamil literature.

Dr Swarnamalya addressed this by captivating the audience with a brief storyline of the novel and the relevance of the character Madhavi, even today.  Madhavi, daughter of Yayati, was granted the boon of being an eternal virgin. This boon, however, turned into a bane as she was reduced to a pawn used in transactions. These exchanges made using her body as a currency led her to marry three kings and a sage. Albeit portrayed in a very one-dimensional, emotionless form, Madhavi falls in love with a king who goes on to reject her as well. She’s being called and dealt with as a prostitute and this drives her into madness. Madhavi, a blessed woman, suffers at a personal, emotional, and physical level due to the decisions taken for her by the ones who feel they are ‘in charge’ of her existence. M.V. Venkatram addresses the plight of Madhavi and draws his readers’ attention to this patriarchal repression of voices in the classic.

She commented that ‘this work is at the cusp of how Tamil Nadu has looked at feminism and the larger framework of patriarchy’ thereby asserting its place as an iconic piece of literary work. Also referring to the classic Kannagi and Madhavi debate from the first Tamil epic Silapattikaram, Dr Swarnamalya addressed the myth of ‘eternal virgin’ and how women are often pitted against each other based on society’s ideas of how these women are constructed and viewed. The idea of morality and virtue, therefore, works differently for different genders. Therefore, Madhavi reclaiming her voice, taking a stand for herself and ending her life abruptly by choice become radical acts of courage and honour that challenge the patriarchy. This rebellion tells the readers that this novel is as progressive and feminist as it can get.

Emphasizing the idea that ‘feminism never stands alone’ and it needs to be looked at from an intersectional perspective, Dr Swarnamalya highlighted the novel’s ability to provide Madhavi an active role and voice.

Ashwani Kumar went on to read one of Salma’s most iconic poems, ‘The Rust of Silence’ and furthered the conversation by asking her how she related to the silences of her life.

By juxtaposing her work with that of Nithya Kanni, Salma spoke of how ‘women are only seen as a body’ which is why her works attempt to free themselves from these bounds that silence women. Through Salma’s reading of excerpts from her novel Irandaam Jamangalin Kadhai (The Hour Past Midnight), the audience had a first-hand experience of her book in Tamil.

This was followed by Dr Swarnamalya’s reading of the translations of the said novel, adding a nuanced understanding to Salma’s work.

Being the first Tamil-Muslim woman during the 90s to talk about body politics, Salma also opened up about how translation faces the issue of censorship, thereby affecting the body of work created. Shedding light on how literary violence is also committed while policing women’s works through ‘mistranslation’, she shared an instance of the meaning of her poem being lost in translation.

While discussing the current situation of contemporary Tamil novels, both Salma and Swarnamalya challenged the perception of Tamil Literature in translation that the mainstream literature holds. Apart from the popular novelists in mainstream literature, Tamil literature does have a lot more to offer, they concurred. Swarnamalya added that the Tamil Language is one of the oldest languages and hence the literary history also needs to be looked at in a different light unlike the generalized lens of ‘vernacular literature’ that is often used to look at literatures and literatures in translation.

The conversation then made way for an enthralling performance by Dr Swarnamalya.

The performance captured the true essence of Madhavi’s life through the use of music, narration, dance, and theatrics. Portraying multiple characters on stage, Dr Swarnamalya’s expressive performance brought alive the story of Nithya Kanni on stage. At the centre of it all, was the character of Madhavi, whose experiences of being a woman in a patriarchal society was given an outlet. With an abrupt end to the performance, similar to how Madhavi’s life ended, Dr Swarnamalya’s performance left the audience wanting more.

The crowd gave a standing ovation and the event ended with Ashwani Kumar addressing a vote of thanks to the Indian Novels Collective team, the guests for the evening and Indira Chandrasekhar, the curator of the Literature Stage at the Kala Ghoda Arts Festival. 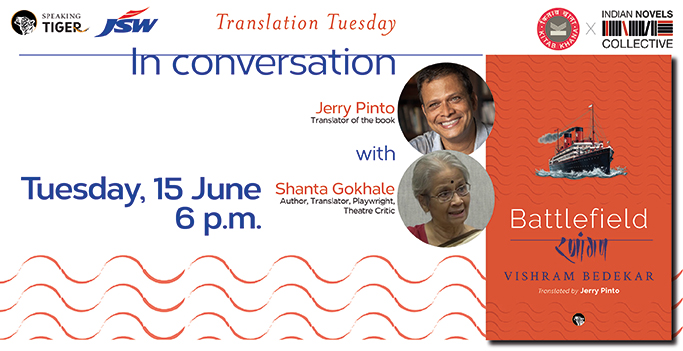